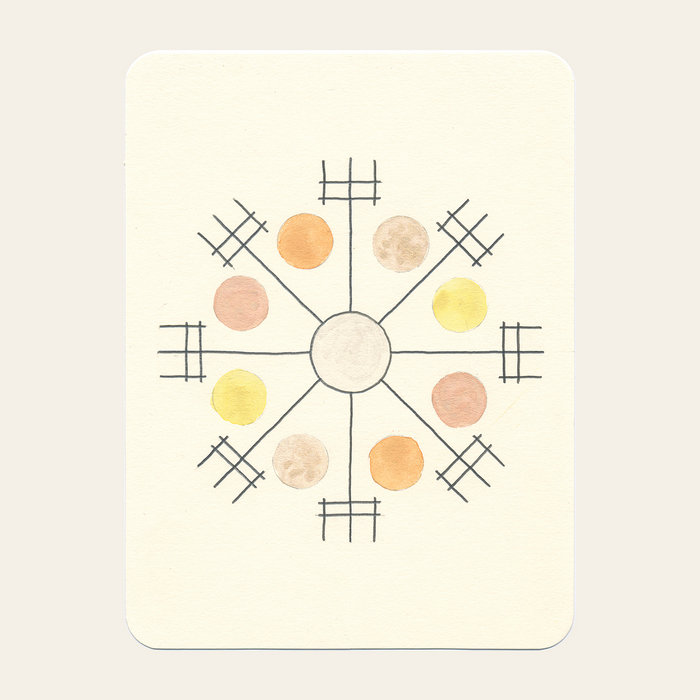 Lars Gotrich Each beat rings deep in the music of Jon Mueller.

Rhythm is a universally understood element. The intuition to move in response to rhythm, or at least recognize the feeling, speaks to the relationship between rhythm and our bodies. It’s an intuitive language.

Intuition is also at work in creating rhythms. What combination of notes causes the deepest resonance? When does the connection to them feel strongest? Like dreams, the answers to these questions seem to be somewhere within us, as reflected by artist Jesse Bransford, whose 'Dream Stave' is featured on the record’s cover. In old Norse translation, ‘stave’ can be understood as ‘spelling’ in order to create meaning. Similarly, the repetitive notes of rhythm can seem to spell a kind of hidden meaning between our intuition and movement.

'Codex Intueri' was conceived and performed by Jon Mueller, using drums, percussion and gongs. The pieces were then arranged and mixed by James Plotkin, who reveals constructions of rhythms that imply distinct experiences. Also adding modular synthesizer on each piece, James’ overall approach to these recordings blurs the line between acoustic drumming and more formalized techno music.

Jon Mueller’s aim has been to move drums, percussion and rhythm from its anticipated backbeat to a central musical focus, something more intuitive and natural than usually imagined. Audiences throughout the United States, Canada, Europe, Japan, and the United Kingdom have experienced this idiosyncratic point of view as, paradoxically, both ‘cathartic’ and ‘meditative’. Notable solo performances have taken place at the Guggenheim Museum, New Museum, Musée des Beaux-Arts de Montréal, Alverno Presents, SXSW, Big Ears Festival, Hopscotch Fest and Witching Hour Festival.

Outside of his solo work, Mueller has performed and recorded with Mind Over Mirrors, was a founding member of the bands Volcano Choir, Collections of Colonies of Bees and Pele, and has worked in depth with artists Dawn Springer, Chris Hefner, Jason Kahn, Asmus Tietchens, Z’EV, Andrew McKenzie, Rhys Chatham, Jarboe, James Plotkin, Duane Pitre, and Raymond Dijkstra.

His solo work has been released by Table of the Elements, Type Recordings, Important Records, Taiga Records, SIGE Records and others.

Cover image: 'Dream Stave' by Jesse Bransford, 2017, 5 1/2 x 7 1/2”, watercolor and graphite on paper. Used with permission. More of Jesse’s work in this vein can be seen in his 'A Book of Staves' published by Fulgur, UK, and at his site: www.jessebransford.com.

Cassette edition designed by Jon Minor in Portland, OR.

Featured sounds from Fly Lo and Ahmed Idris, plus Mother Nature hops on to drop off new project